Showing posts from July, 2009
Show all

July 16, 2009
I know this has been blogged before, but I feel so strongly about it, I need to post my own rant as well. Apple for some obscure reason decided to change the layout of the dock connectors charging pins between the iPod Touch and its 2G successor. The same fate also hits iPhone 3G and 3GS. The older models used the FireWire portion of the dock connector to charge the devices battery. Many accessories, including Apple’s own hifi adapter kit and most car-connectors are now useless in terms of battery recharge, because the new models only access “USB electrons”. I guess we can call us fortunate that we don’t need a Linux kernel module in our cars to keep charging while driving.  This is really annoying, because before the new device I would just plug the iPod in when I got into the car, listened to podcasts while commuting and could leave with a fully recharged device when I arrived. Now they seriously ask me to pay €25 ($35) for an adapter that will a) provide a cross-over of the po
Post a Comment
Read more

Modularizing Software with Ant/Ivy and Eclipse

July 09, 2009
This is one of the rare times when you get the chance to some technical cleanup and rewrite time from management, so we are trying to get some new things going that were pushed time and again in the past. In the architecture meetings we have been telling ourselves that we’d have to modularize better, so more unit tests could be written and overall quality be improved. Instead for lack of time we had to add new features to an already overloaded codebase and cross our fingers that nothing would go truly wrong in production. So far we have been very lucky. Having some time now for cleanup and refactoring we quickly came to think about the build process – currently a large pile of Ant scripts, resembling a full blown software project in its own right regarding the complexity. I asked around on StackOverflow for experiences and best practices. I got some interesting answers, including recommendations for using OSGi and maven. I have some experience with OSGi from a previous project, and
Post a Comment
Read more

July 06, 2009
I am almost done with the domain changes to this blog. It is currently reachable via www.danielschneller.com which is what you should already be seeing in the address bar right now. The danielschneller.de domain is working partially, I guess some DNS updates have not propagated to everywhere yet. It should redirect to the .com immediately, however currently it still seems to have the CNAME to Blogger in place. This should only be a matter of hours now. Mail is configured for both domains and seems to work just fine. During the whole change process I had to contact DomainFactory 's support for some tips on which contract types would give me the features I wanted at the minimum possible cost, and even though it was on Sunday I got a (sensible human-written) response within 5 hours. Pretty impressive. Their web interface is clean and understandable, very nice as well. And the pricing is really affordable: I now have 2 domains in the MyMail package which is 6.60€/year per domain +
Post a Comment
Read more 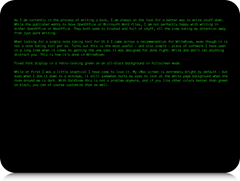 As I am currently in the process of writing a book, I am always on the look for a better way to write stuff down. While the publisher wants to have OpenOffice or Microsoft Word files, I am not perfectly happy with writing in either OpenOffice or NeoOffice. They both seem to bloated and full of stuff, all the time taking my attention away from just pure writing. When looking for a simple note taking tool for OS X I came across a recommendation for WriteRoom, even though it is not a note taking tool per se. Turns out this is the most useful – and also simple – piece of software I have seen in a long time when it comes to getting the one task it was designed for done right: Write and don’t let anything distract you. This is how it’s done in WriteRoom; a fixed font display in a retro-looking green on an all-black background in fullscreen mode: While at first I was a little skeptical I have come to love it. My iMac screen is not set to a very high brightness by default - but even wh
1 comment
Read more

July 04, 2009
I just whipped through the ordering process for danielschneller.com with DomainFactory. From ordering to having the domain online and reachable (at least for me) it took less than 30 minutes, including automated SMS message for activation, setting up mailboxes and configuring the CNAME to point to the blog. I am impressed. Now I will try and test this a little more, before maybe migrating the rest of my domains to them as well…
3 comments
Read more

July 04, 2009
Earlier this week I (again) thought about changing my Blogger settings to use my own domain - in the end what is it good for to pay every year for my custom danielschneller.de domain only to have it forwarded to the one-of-many .blogspot.com subdomains. So - having pushed this for in fact several months now - I finally went to the Dashboard and looked up the instructions on how to configure my own domain name - turns out you need to set up a CNAME and point it to a Blogger subdomain. Unfortunately my (then) current 1&1 contract did not allow DNS customization - I could just set up an HTTP redirect which I had been using all along. This is when the fun began... First I tried to find a way to somehow upgrade my contract from within their "control-center" to no avail. I did find - via their homepage - the homepage hosting offerings, however there did not seem to be a way of telling them I already had the domain in a running contract. So I contacted their support team and
4 comments
Read more
More posts
Follow @dschneller
Tweets by dschneller