July 26, 2011
After my recent Mac OS X 10.7 Lion upgrade I was greeted with a dialog box after reboot telling me that


com.apple.dock.extra.xpc needs to take control of another process for debugging to continue. Type the name and password of a user in the "Developer Tools" group to allow this. 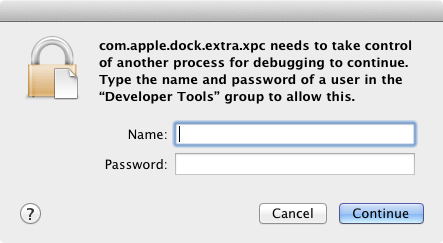 No problem, I thought, and entered my credentials. Alas, to no avail. My name and password were rejected, which had me a little panicked at first, because I thought the OS upgrade might somehow have botched my account, potentially locking me out of my Mac later.

Hitting cancel would only get rid of the message for a few seconds, then it would reappear, again and again.
Turns out the solution was quite easy: Go the Mac App Store and download Xcode 4.1. Once the installer has finished downloading, run it to replace the Snow Leopard version of Xcode 4.0 with a Lion compatible one. Once that is done, the message will not appear again.

Please note: Maybe I could somehow have fiddled with my accounts privileges and group memberships, but as I needed Xcode anyhow, installing the correct version seemed the logical thing to do.
And by the way: Should the Xcode 4.1 installer seem to take forever, make sure there not this little popup hidden behind some of the other Windows on screen: The installer will stall, until you close iTunes and the iTunesHelper (which may be running, even if iTunes is not. Use Activity Monitor to quit iTunesHelper if needed.)

Update: Apple has released an update to the Xcode 4.1 installer (4.1.1), which will fix this (iTunes) problem. As the release notes say, if you have already installed it, there is no need to update, as the included software is the same as before: