[Update]As can be read on Mac OS X Hints here, this setting also applies to the side bar in Mail.[/Update]

Apple has - as was to be expected - slightly modified the appearance of many Mac OS X controls in 10.7 "Lion". Some of those changes have caused protest and debate around the net, but I believe this is just the same as it is with face-lifted car designs, which means in a few weeks everyone will have gotten used to the new style and consider the previous version old-fashioned.

However, there is one particular little issue that I could tell I would not come to like immediately: The icons - and more importantly the font-size - in the Finder's left hand sidebar is way bigger than it was in Snow Leopard. This makes the source list look much more cluttered in my opinion.

At first, I headed for the Finder's View Options context menu, but there's nothing there to change the sidebars appearance. A little more digging then brought me to the General preference panel in System Preferences (previously called Appearance). There you can make the desired change: 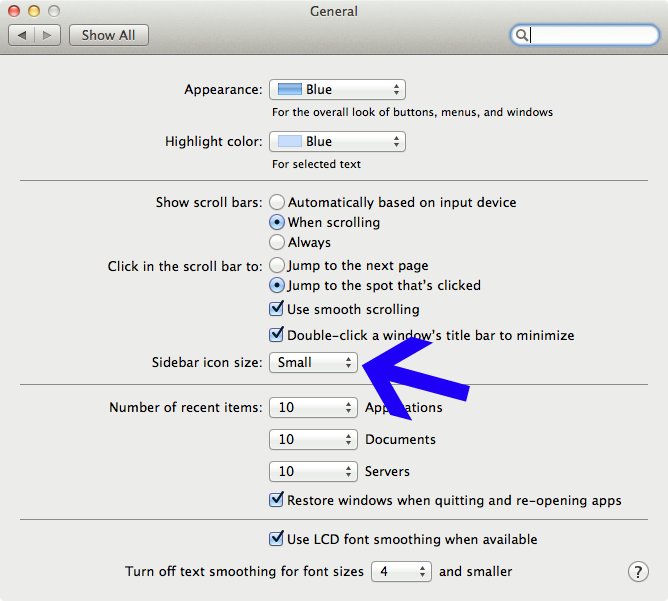 The following pictures show the three choices (Small, Medium, Large) with Medium being the default. Set to Small the Finder looks much friendlier again.

Oh, and while you're at it, you might also want to change Show Scroll Bars setting to When scrolling, instead of Always or Automatically based on input device if you like me sometimes use an older mouse.