With the memory expansion board fixed in the last post, I needed to perform more electronics fixes, this time to get the mouse back in working order. Notice that I did this in March 2018, but somehow forgot to write the post. So with a little delay, here it is.

This is the fourth post in a series about restoring an Amiga 500 back to its former glory. Here are all of them so far. I’ll try to remember to update this in all related entries.

When I won the ebay auction, I quickly realised that finding an Amiga compatible (modern) monitor would be a problem. Luckily, my 2011 Panasonic plasma TV has a SCART input, which I remembered to be compatible with the Amiga RGB output. Resisting my first urge to build a cable myself, I instead ordered one for a few Euros from another ebay seller. While waiting for it to arrive, I could just do a very superficial check. Read the first post Amiga 500 Restoration for more on that.

When the cable finally arrived, in the meantime I had received two sets of Workbench and Extras disks, too. Armed with those, without even having the keyboard caps put back on, I hooked up the Amiga to the TV, just because I was so curious to see the Workbench for the first time in decades. Fully aware that I wouldn't be able to type anything, at least I could click around with the mouse for a bit. Or so I thought.

When the workbench screen came up, I noticed that only one of the mouse buttons worked. The menu bar would change when clicking and holding the right one, but no click events were registered by the OS for the left button. My first guess was that the left button switch was just worn out and had failed and would have to be replaced. But, I thought, maybe it was something else, because both buttons sounded and felt just the same. So I suspected something might be wrong with the cable or the connector and I would have to investigate in more detail. Spoiler alert: Sometimes your first idea is not wrong, but also might not be completely right.

I opened the mouse and checked continuity between the connector on the mouse PCB and the D-SUB9 socket at the end of the cable. And bingo: The line for the left mouse button did not show any connection, unless I added a thin wire to the probe and shoved it very far into the corresponding hole in the socket. Visually the plug looked quite worn out, too, so it made sense that the pin from the Amigas male D-SUB counterpart did not reach far enough into the socket to make a connection.

I ordered a replacement connector, and when it arrived, I cut off the original, taking a few closeups to easily verify the order of the wires later. 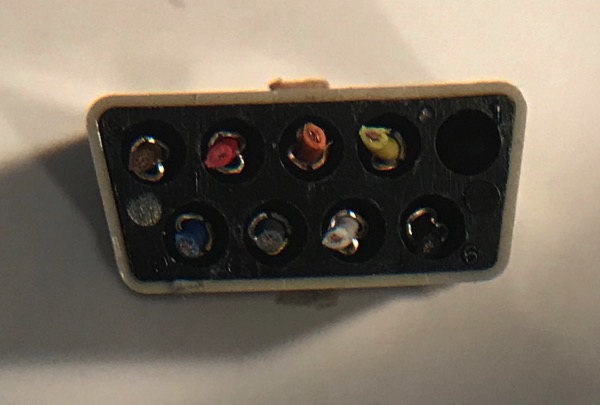 Next, I tinned the leads to make it easier to fit them into the new connector… 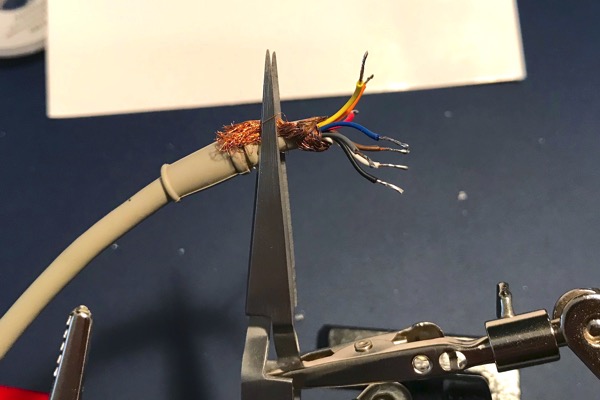 … and then soldered them into place: 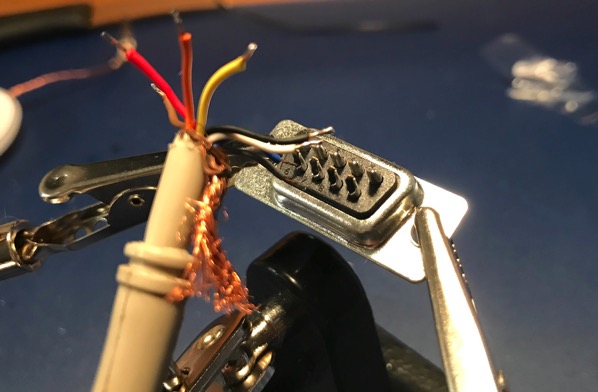 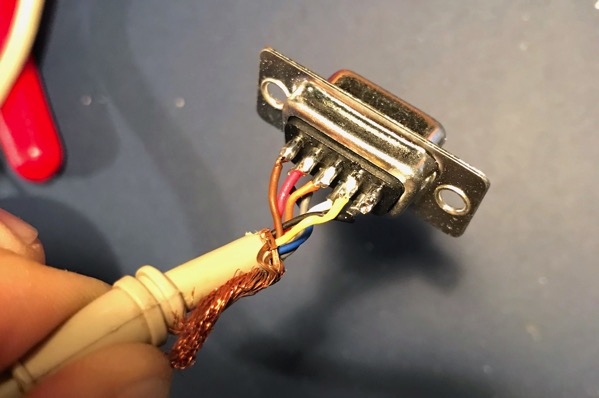 Turns out, the first one was easy, but with each further one, it got more difficult to fit them into their little solder cups while not burning the insulation of the previous ones. I am quite pleased with the end result, though.

I double checked I had connected each color to the right pin and also verified connectivity between the connector inside the mouse, and the new plug. This time, none of them made any trouble.

Finally I just needed to put the casing around the connector. This is what it looked like in the end: 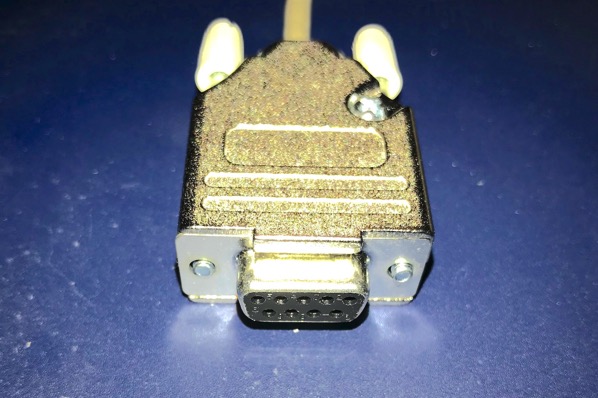 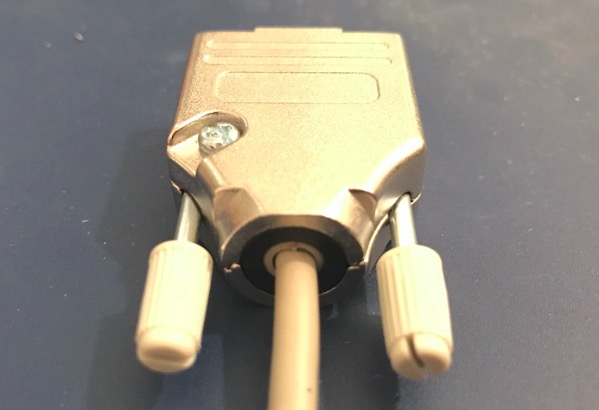 It is not quite as slick as the original one, but what can you do...

Eager to finally get some clicking action done, I hooked the Amiga up to the TV again. Imagine my surprise disappointment when it still did not work. Also, and I had noticed that before, but not paid attention to it, the pointer only moved along one axis. So there was still something wrong with that mouse, or was it?

With the new connector in place, I had a closer look at the mouse port on the motherboard. At first, it looked ok, but when I pointed a light directly at it at just the right angle, this is what I saw: 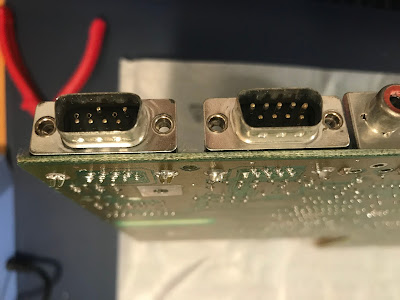 So not only was the connector on the mouse worn out, but also its counterpart on the board had three broken pins. Port 2 was fine, but AmigaOS does not let you choose between them for the mouse. So that needed replacement as well. Here's a close-up of the broken port from a slightly different angle, making the damage even more obvious: 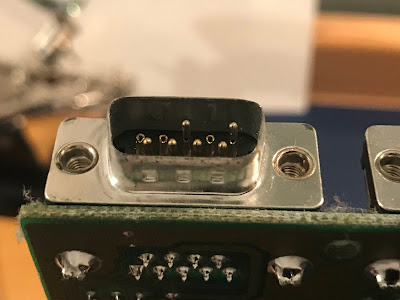 Once the ordered replacement arrived, I needed to desolder the defective port from the motherboard. That turned out to be quite challenging. There are two anchoring hooks, one each to the left and right of the actual socket. Those are supposed to provide mechanical stability for the ports, but at the same time they act as a heat sink, because they are directly attached to the connectors casing and also linked to the board with big blobs of solder. So it took quite a while to get everything hot enough to finally melt the solder and get the old part out. This is the result (from the underside of the board) after cleaning up the mess of flux and solder remains: 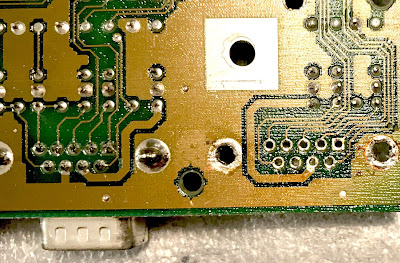 As you can see, not only does the socket and its shield act as a heat sink, but they are soldered to a large ground plane on the circuit board as well, so if you ever need to do something like this yourself, be patient and make sure to use a soldering iron with enough power. Alternatively, preheat the board around that area with hot air, if you have a hot air station.

Getting the new part in was, of course, way easier. Here's a comparison of the old and new sockets side by side, and the underside of the board with the new part in place: 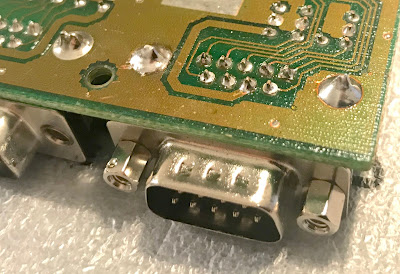 I made sure to again put a good amount of solder in the mounting holesto provide the required physical strength to survive lots and lots of insertions for years to come.

Clearly, now with the connectors on both the computer's and the mouse's side fixed, what could possibly go wrong now? First of all, at least the pointer was now moving correctly along both X and Y axes, but the left button was still not working. Remember the opening paragraphs of this post?

Spoiler alert: Sometimes your first idea is not wrong, but also might not be completely right.

You might be guessing it already: When I had checked for continuity after replacing the plug, I had measured from the mouse PCB connector to the other end of the cable, but not from the switch. And, of course, the left button had actually failed. I had a few of those in stock, so as a final step I replaced them both the left and the right ones. 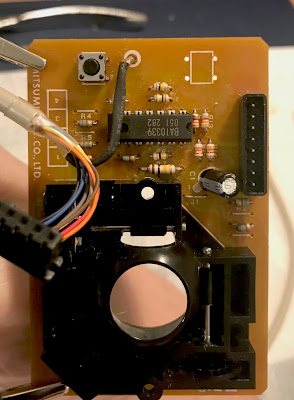 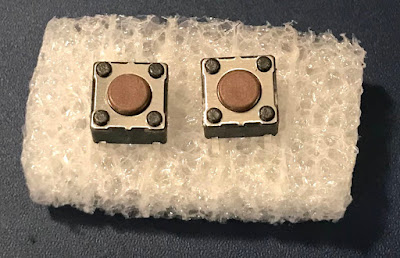 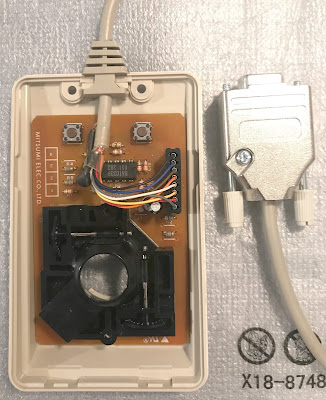 When first hooking up the computer to the TV little did I expect how much damage had to be repaired to get the mouse working again. Nevertheless, following through with all these individual repairs was a good exercise in fault finding, and in staying persistent, even when the initial fix did not bring the mouse back to (full) life.

In the end I can now be sure, however, that mechanically this mouse and mainboard are going to last for a long long time :)