Vista still stands in its own way with USB drives

Some things will apparently never change. After I learned that the notorious temp-dir-copy-cycle most zip tools go through is probably a Windows feature, today I came across an issue I thought should finally have been addressed in "Windows 6" (Vista).

I had inserted a USB pen drive ("USB DISK") earlier and just wanted to eject it. 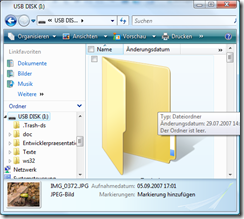 From my point of view this is a fairly typical scenario. When you insert the drive Windows will offer to open it in an explorer window. This is just what I did. I copied a file from there to the desktop and wanted to remove the device: 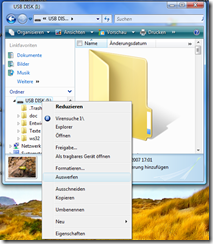 "Auswerfen" is the German word for "Eject". Guess what...

The same old story once again... This lengthy message tells me that some application is using the drive and that removing it might cause data-loss, kittens could die and the whole blah blah.

Of course I can click on "Fortsetzen" (Proceed), but this is not what I would expect of a 21st century user interface... The least thing would be a list of process names to get any clue of what program might still be accessing the drive and whether it is okay to close their handles or not...

Why on earth is it so difficult to just detect that no one else but the very same explorer window that offered me the context menu has a handle on that drive? Maybe I would even accept the warning if the pen drive's content was showing in a second window, but come on, how difficult can it be?